Jutland Road-Trip with Jørgen and David

This week makes it officially less than one month until I head to Kastrup airport one final time to board a plane and return home to North Carolina. In other news, I have only cried three (3) times today.

On a positive note, we had our final travel break last week (upon further review, this is still also a negative note. happy/sad). Some people used this break to continue exploring more of Europe; others used it to stay around Copenhagen to rest and recover before the grand onslaught that will be finals. My week was a bit of a hybrid between these since I had the unique and incredible opportunity to spend a few of my break days road-tripping around Denmark and exploring Southern Jutland with none other than my faithful visiting hosts Jørgen and David.

When I signed up for a visiting host during my time in Denmark, I was expecting it to be a compromise between the choice between a homestay and living with Americans. I was looking forward to the cultural aspects (and maybe the home cooking) of a Danish host family, but I also couldn’t pass up the opportunity to live in the Outdoor LLC, so I figured opting for Outdoor LLC with a visiting-host would provide the best of both worlds.

Plenty of people I have met at DIS have fun visiting hosts whom they have met up with a few times throughout the semester and I’m glad that they all have had very different experiences thanks to their hosts. With that said,

Jørgen and David have far exceeded my hopes and dreams of a visiting-host family by not only having me over and providing a homecooked meal every now and then; they have provided so many opportunities for me to explore Copenhagen and Denmark in ways I never would have otherwise had. From watching David on the stage in a local play above the Bastard Cafe to visiting their old house in Helsignør and ultimately this road-trip around Southern Jutland, they’ve helped to define my semester in Copenhagen and I couldn’t be more thankful.

The first stop on our adventure was the Frøslev concentration Camp, located just north of the Danish/German border.

The single concentration camp located in Denmark is the product of an interesting and convoluted storyline of WWII which is often overlooked outside of Denmark. It was built by the Danish government in hopes that it would prevent any Danish Resistance members or enemies of the state captured by German forces from having to be sent to any of the more dangerous camps in Germany. Museums housed inside the barracks tell the stories of the Danish Government’s controversial collaboration with the Germans, what life was like for prisoners of the camp, and the ultimate ironic twist in which, after the war, Nazi sympathizers were put to work in the camp for their crimes while former prisoners became the camp’s new guards.

Aside from the fact that it was once a concentration camp, the area now is a peaceful spot to enjoy a walk and learn some history.

The spot basically known for being one of Denmark’s biggest losses in recent history. 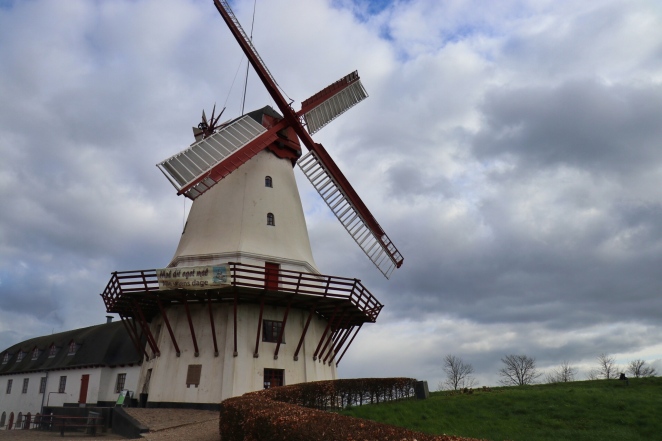 The windmill marks the location of the most important battle of the War of 1864 in which Germany took a good chunk of land from Denmark, changing the Danish national mentality and basically setting the stones for what would become the welfare state and everything about modern Denmark. It was a really cool spot to visit since a lot of our discussion in Danish Language and Culture in recent weeks has been about this exact topic.

The battlefield has a museum area where you can tour a recreation of the Danish fort, complete with soldiers in costume, a fire to make pancakes over (I’m not sure why, but didn’t question it), and some history channel-type historical videos about the war. The museum felt just like an American Civil War museum and, overall, was a bit lame, but the surrounding area is beautiful to walk around and full of spots to check out.

This area was the main location that initially spurred my talks with David and Jørgen about a trip to Jutland. Its a brand new national park that runs along the western coast of Jutland all the way down through Germany and the northern coast of the Netherlands. The park is particularly famous for, of all things, bird watching. But this isn’t your sitting-in-a-tree-with-binoculars-hoping-to-maybe-possibly-catch-a-glimpse-of-a-bird-style bird watching. Here, you have nothing but flat, open planes and thousands of birds flying in gigantic clusters that blot out the sun (hence the name “The Black Sun” aka the only time bird-watching has sounded cool).

Pictured: the level of cool that your mother warned you about when you were little

While we weren’t even at the park during prime bird time (that’s earlier in May or in August), we still managed to catch a glimpse of a huge swarm of birds flying overhead in a weird, massive flock.

Aside from the birds, we also spent some time walking and driving around the park, ever on the lookout for an Instagram opportunity. 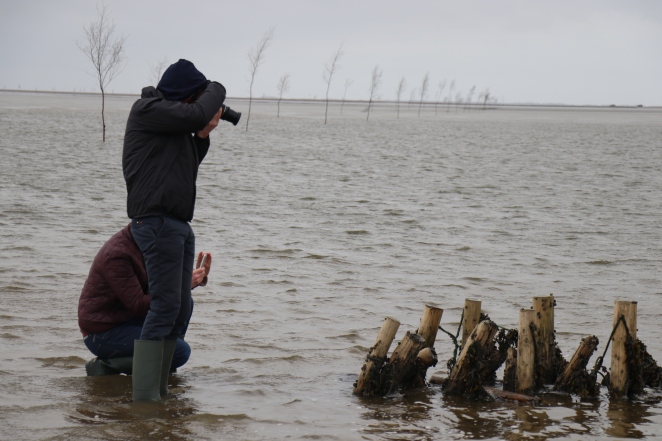 This generation and their phones, amiright?

We explored along the beach and then even crossed a land-bridge which is only available during low-tide to visit a tiny little island complete with a tiny little village containing a tiny little church and very Danish looking little houses. 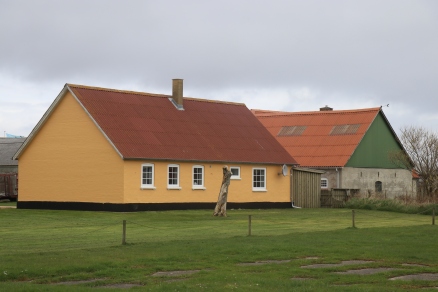 Pictured: David having the time of his life (obviously) 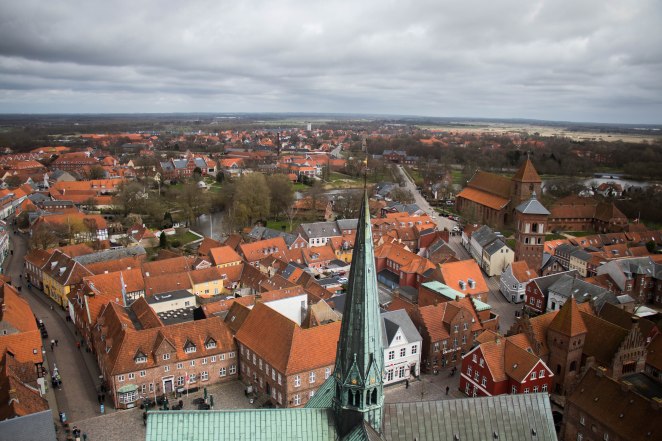 Just look at all that old

Back to the culture, Ribe is very quaint little town just ten minutes from Vadehavscentret, the super cool brand new museum at the Wadden Sea, which might have been one of the best museums I’ve ever been in. As for Ribe, pretty much everything here is, as you can guess, pretty old. Its feels like if you condensed every single old building and cobblestone street in Copenhagen and then concentrated them all together in a little circle and then stuck and giant cathedral right smack in the middle, that’s basically Ribe.

This building is so old that it’s gone slanty

For being a small, old, little town, Ribe is really one of my favorite towns to have visited outside of Copenhagen so far. As you explore Denmark, you get a feeling that once you’ve seen five little Danish towns, you’ve basically seen them all. Ribe, on the other hand, has its own very particular vibe to it. The canals running through the city, ancient looking patterned doors on each home, and windy cobblestone roads make it stand out as distinct and very memorable.

Not only is the city itself unique, but it is also home to one of the more interesting Churches you will find in Denmark.

Ribe Cathedral has been through a lot. It’s seen multiple fires, cannon fire, huge floods, collapses, and the general mayhem that seems to occur around large cathedrals. As such, it is now a bit of a mish-mash of all sorts of architecture based on when each part of it had to be restored and however much money the town happened to have at the time. This leads to a definitely unique style of cathedral which carries all sorts of decoration and style.

Last and, honestly, maybe the least, I convinced David and Jørgen to drive through the city of Esbjerg on our final day so that I could see this. 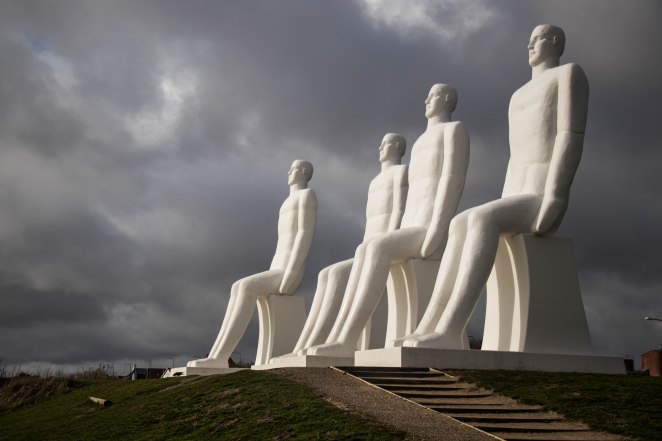 “I’m not quite sure what this is, but I like it.” – an acceptable answer to this

Man Meets the Sea is a sculpture revealed in 1995 to commemorate the 100 year anniversary of Esbjerg beings its own municipality. Apparently, they are inspired by the heads of Easter Island. They sit here at the edge of the sea and overlook the harbor, symbolizing the bridge between man and the ocean. As poetic as that all sounds, I would have expected them to look a little less… silly?

This man looks like he just realized he left the oven on and the windows are open while its raining and he also probably forgot its his wife’s birthday.

I suppose it isn’t the detail that is so important here as compared to their size and their symbolism. As much fun as they are to poke fun at, I’m still glad that we took some time to go check them out and at least from the west coast you get a really beautiful view of the sunset directly over the water.

And lastly, I want to again personally thank Jørgen and David for going out of their way and being incredibly awesome visiting hosts who have provided way more for me than is to be expected. We had a nice little routine going over the week and I will always enjoy our hours long life talks over wine, olives, and fighting for the salt and vinegar chips.

You’ve really helped to make Denmark for me ❤

Please feel free to leave feedback, it's the best way for me to learn what is good and what can be improved. Thanks!